Chronic diarrhoea (diarrhoea present for two to three weeks or longer) is a common presenting sign. Differentiating whether the diarrhoea is small or large intestinal in origin can help identify differentials and guide the approach to diagnostic investigations and potential management strategies. Where a cat is severely unwell, or has a poor body condition, abnormal abdominal palpation, melaena or hypoalbuminaemia, full investigations may need to be performed more urgently, but it may be reasonable to stage diagnostics and treatments in otherwise clinically stable cats, and nutritional support can play a key role early on.

Up to 50 percent of cats with chronic idiopathic gastrointestinal (GI) problems may have a food sensitivity (defined as a food allergy or food intolerance) and could therefore benefit from dietary modification (Guilford et al., 2001). Of high clinical relevance, improvements should be seen within just two weeks of starting on an appropriate diet. Diet is thought to be of potential benefit in a range of CEs and a diet trial relatively early in the diagnostic investigation process may be helpful as both a diagnostic and a therapeutic tool in many individuals.

Three dietary options can be considered when trying to diagnose a food-responsive CE or selecting a diet that may help support a cat with a CE: highly digestible diets, hydrolysed diets and novel protein diets

Three dietary options can be considered when trying to diagnose a food-responsive CE or selecting a diet that may help support a cat with a CE: highly digestible diets, hydrolysed diets and novel protein diets. Diet may help support the GI tract in a number of ways. For example, dietary components may support the GI microbiota as dysbiosis is very commonly present in chronic diarrhoea. A novel protein or hydrolysed diet containing a limited antigen content may help minimise adverse food reactions (AFRs) and be helpful in both the diagnosis and management of AFRs. It is important to note that the only way to accurately diagnose an AFR is an elimination diet trial. Serology testing for food-specific IgE and IgG shows low repeatability and has a highly variable accuracy (Mueller and Olivry, 2017), and thus should not be routinely recommended.

These are often selected for acute diarrhoea cases and may be used in many cats with chronic diarrhoea too. There are a number of commercial highly digestible gastrointestinal diets available and they tend to be highly palatable to maximise dietary intake and ensure energy requirements are met. The high digestibility can help reduce exposure to dietary antigens, minimise complications associated with undigested food (eg osmotic diarrhoea, altered microflora) and aid nutrient absorption (Laflamme et al., 2012), particularly in cats with a suboptimal digestive ability. These highly digestible intestinal diets incorporate many of the key dietary characteristics helpful for cats with chronic diarrhoea (Figure 1).

Relatively high protein levels are critical to the health of the gastrointestinal tract, as they provide energy and promote the natural barrier function of the intestinal mucosa. Protein of a high biological value is beneficial to help reduce exposure to ingredients which could cause an AFR (Laflamme et al., 2012), but it should be remembered that highly digestible diets are not the same as restricted ingredient diets and protein sources do not tend to be limited. Most therapeutic gastrointestinal diets incorporate increased levels of omega-3 fatty acids and appropriate levels of soluble and insoluble fibres to help normalise gastrointestinal motility and provide a source of prebiotics (Figure 2).

Cats have a lower inherent need or ability to digest carbohydrates, and carbohydrate digestion is thought to decrease in cats with chronic enteropathies (Laflamme et al., 2012). Excessive carbohydrate content can be deleterious and lead to osmotic diarrhoea, so restricted levels of highly digestible carbohydrates are desirable for many cats with CE. In comparison to dogs, cats are able to digest and utilise high levels of dietary fat and studies have confirmed that fat restriction may not be beneficial in cats with chronic diarrhoea (Laflamme et al., 2011; Figure 3), with clinical improvement documented both with and without fat restriction. A highly digestible diet with moderately high fat levels is better adapted to the unique feline digestive physiology, meets the nutritional needs of a cat with debilitating GI disease and can allow reduction in the carbohydrate content of the diet. Higher fat levels also promote palatability.

The evidence base for use of highly digestible diets is based on a relatively small amount of evidence including the aforementioned study (Laflamme et al., 2011) and a study of 15 cats conducted to test the efficacy of two therapeutic diets marketed for cats with diarrhoea (Laflamme et al., 2012). In this study, both therapeutic diets resulted in a significant improvement in average faecal score over a four-week period, with improvements in 67 percent of cats when on one of the diets and 40 percent of cats when fed the other diet. Normal stools were achieved in 13.3 to 46.7 percent of cats, confirming the value of dietary change in the management of chronic diarrhoea in cats (Laflamme et al., 2012). Both diets used are commercially available in the UK.

Where there is a strong suspicion that dietary antigens may be a contributor to the chronic enteropathy, novel protein or restricted ingredient diets or a hydrolysed diet may be helpful. In order to ensure that the diet selected is truly “novel” a comprehensive dietary history is needed, and it may be difficult to fully ascertain all antigens a cat has been exposed to. Diet history forms may be helpful when obtaining a comprehensive diet history. Dietary antigens most commonly identified in cats include beef, fish and chicken (Mueller et al., 2016), although it should be noted that these results came from surveying cats with cutaneous adverse food reactions so may not necessarily be reflective of those with GI signs. Approximately 50 percent of cats with chronic diarrhoea will respond to a novel protein diet (Guilford et al., 2001) and there are a number commercially available which use slightly different ingredients. An alternative is a home-cooked diet but these should generally only be used short term, for example to convince an owner that there may be a dietary element to the chronic diarrhoea. Unless formulated by a veterinary nutritionist they risk nutrient imbalances and are not appropriate for long-term feeding.

Hydrolysed diets are based on protein sources which have been enzymatically cleaved to a very small size, reducing their molecular weight to below that needed to stimulate an immune response (Figure 4). They can be particularly helpful where it is difficult to ascertain a novel protein for a patient, although a recent large-scale review of the current evidence for dietary management of GI signs in cats concluded that it is not possible to ascertain whether a novel protein or hydrolysed diet is likely to be most effective (Makielski et al., 2019). They tend to have high digestibility and increased omega-3 fatty acids which can be helpful, but one disadvantage is that the hydrolysis process can make proteins unpalatable, so acceptance of these diets may be a challenge in some patients.

Evidence for their use includes a small-scale randomised controlled trial where the efficacy of a hydrolysed soya diet was assessed in 10 cats with chronic enteropathies (Waly et al.,
2010). Cats were fed either a hydrolysed soya protein diet or a therapeutic intestinal diet over a four-week period. GI signs resolved in 70 percent of cats fed the hydrolysed diet versus 30 percent of cats fed the intestinal diet. Although different clinical responses to dietary intervention were observed, the effect of the hydrolysed diet compared to the intestinal diet was not statistically different; however, this observation may have been influenced by the small number of cats enrolled in the trial (Waly et al., 2010).

A recent study also provided support for the use of hydrolysed diets in cats with chronic vomiting and/or diarrhoea (Kathrani et al., 2020). This evaluated the responses of 977 cats prescribed a hydrolysed diet with or without concurrent medication (antibiotic and/or glucocorticoids) for chronic vomiting and/or diarrhoea of undetermined aetiology, by analysing records of cats in primary-care practice. The level of poor response, rather than positive response, was measured. A poor response was seen in 42 percent of cats within the follow-up period of at least six months. Cats older than six years and cats prescribed antibiotic and/or glucocorticoids for vomiting/diarrhoea before and concurrently with the diet had higher odds of a poor response (although this may have reflected the severity of their disease). The findings suggested there is value to trialling a hydrolysed diet first as a sole therapy in cats with chronic vomiting/diarrhoea when diagnostic investigations do not reveal a cause, before resorting to antibiotic and/or glucocorticoid therapy for cases (Kathrani et al., 2020).

A diet trial is appropriate for many cats with chronic enteropathies and may be considered relatively early in the diagnostic investigations in otherwise clinically stable and younger cats. Obtaining a good diet history can help identify a novel protein source as well as any food preferences (flavours or textures) of the patient and may guide the choice between a highly digestible, hydrolysed or novel protein diet, helping optimise response to the trial. If conducting an elimination diet trial, a restricted ingredient diet should be used first. If improvements are not being seen within two weeks, moving on to a diet in a different category is generally recommended to see if this produces improvements, particularly since individuals may respond differently to diets within different categories.

Preparing owners for the possibility of trialling multiple diets, as well as emphasising the importance of owner compliance during the trials, may be helpful. However, there is still a lack of evidence to suggest whether a highly digestible, hydrolysed or novel protein diet is most likely to result in a positive response, or which diet(s) may be most successful in which circumstances, but we do know that dietary management – alone or combined with medical management – can be very helpful in many cats with CE. 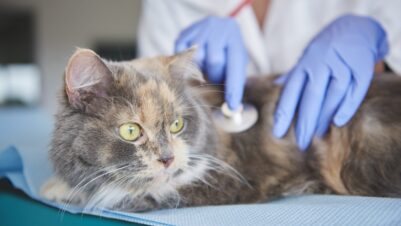 Canine transitional cell carcinoma of the urinary bladder: a focus on diagnosis and management