Feline allergic dermatitis is a chronic disease. The clinician must make the client understand that unless the offending allergen(s) are identified and removed, a cure is not possible. The keys to the successful management of atopic dermatitis are client education and a combination of aetiologic, symptomatic and antimicrobial therapy.

This is useful if the offending allergens have been correctly identified. Fleas and food are allergens easy to avoid, while environmental allergens, such as house dust mites, pollens and moulds, are not. As house dust mite levels are much higher in bedrooms than in the rest of the house, limiting the cat’s access in these rooms may help. Benzyl benzoate spray on bedding, carpets, rugs, etc can kill the mites and degrade their allergenic metabolites.

Allergens are administered by subcutaneous injection at increasing doses and decreasing frequency, until a maintenance regimen is achieved. Good to very good responses are obtained in 50 to 80 percent of cats treated. The mechanism of action of immunotherapy is not fully understood in the feline species; in humans and dogs, it seems that T-regulatory lymphocytes, responsible for dampening the inflammation and normalising the immune system, are stimulated.

Clinical results, as measured by a decrease in symptoms, are seen anywhere from one month to eight months after starting treatment, thus during the initial phase of immunotherapy, symptomatic treatment should be associated to improve quality of life of the patient and its owner. If the treatment is effective, this therapy is given for the rest of the patient’s life. A number of cases will require adjunct symptomatic therapy for at least part of the year.

Symptomatic therapy, with the aim of relieving pruritus and improving skin lesions, represents a pillar of the treatment strategy of skin allergy in cats as in dogs. Symptomatic therapy is implemented in any case the owner refuses to start a hypoallergenic diet, or to perform allergy testing or ASIT, as well as any time the cat does not accept the hypoallergenic diet, has a negative allergy test or does not respond to ASIT.

Symptomatic antipruritic therapy is also of use during the hypoallergenic diet trial (limited to the first month only, to allow evaluation of pruritus during the second month) and in the first months of ASIT, because improvement can take several months to be evident.

A selection of antipruritic and antiallergic therapeutic interventions for feline allergic disease is presented in Table 1 and described hereunder.

Glucocorticoids are very effective in treating the signs of atopic dermatitis. Prednisolone or methylprednisolone is given at 1 to 2mg/kg daily in cats until remission of pruritus (usually three to five days), then the dose is reduced to every other day and then further reduced to the lowest dose that will control the pruritus (generally 0.25 to 0.5mg/kg every other day).

Alternatively, dexamethasone or triamcinolone at 0.1 to 0.2mg/kg daily, then tapered to every 48 to 72 hours, can be used. Prednisone should not be used in cats, as it is not effectively metabolised to prednisolone.

The use of methylprednisolone acetate injections should be limited to a few treatments a year and exclusively in intractable subjects. Unfortunately, even if cats seem to be more resistant than dogs, corticosteroids may be associated with side effects, such as polydipsia and polyuria, congestive heart failure, increased susceptibility to bladder infections, diabetes and skin fragility syndrome (Figure 1).

Steroids can be a good option for short treatment courses or seasonal pruritus, but alternative treatment options should be sought for long duration therapies or in animals affected with liver or kidney disease or with diabetes. An alternative to systemic use of corticosteroids could be represented by their use in spray formulation. In a recent study, the efficacy of a 0.0584 percent hydrocortisone aceponate (HCA) spray was evaluated in 10 cats with presumed allergic dermatitis (Schmidt et al., 2012). The patients were treated twice daily for one month, then once a day or every 48 hours thereafter.

Lesional and pruritus scores decreased significantly, and the treatment was well tolerated by most animals. HCA spray appeared to be effective and safe in these cats, although it is not licensed for use in this species.

Ciclosporin is a calcineurin inhibitor with a variety of immunological effects on the acute and the chronic phase of allergic dermatitis. Ciclosporin has shown the same efficacy as prednisolone in the control of symptoms of feline allergic dermatitis (Wisselink and Willemse, 2009). A lag period of about two to three weeks, in which no response is seen, occurs after ciclosporin treatment is started. Significant reduction in pruritus is expected in 75 to 85 percent of cases within one month of treatment.

To maximise absorption, ciclosporin should be administered two hours before a meal. However, recent data in dogs has suggested that giving ciclosporin with food does not alter clinical outcomes. No information is available for cats.

Side effects reported are transitory vomiting, diarrhoea, reversible gingival hyperplasia and rare weight loss and hepatic lipidosis. The initial daily dose in cats is 7mg/kg for a period of four weeks, then tapered to every other day, then to twice weekly, if results are obtained.

Cats should be FIV and FeLV negative and, due to rare reported cases of fatal acute toxoplasmosis infection, they should not be allowed to eat raw meat, scavenge or hunt.

As of today, there is no antihistamine with proven efficacy in cats for the treatment of allergic skin disease

There is little evidence-based information on the use of antihistamines in cats, as most studies are old and not controlled. In particular, cetirizine has been the object of some open studies that reported a repeatable and sustainable reduction of pruritus in feline allergic cats.

Recently, a randomised, double-blind, placebo controlled, cross-over clinical trial was performed to assess the efficacy of cetirizine administered orally at the dosage of 1mg/kg in cats with allergic dermatitis (Wildermuth et al., 2013). This study found no significant difference between treatment and placebo.

As of today, there is no antihistamine with proven efficacy in cats for the treatment of allergic skin disease. Results are variable and unpredictable, and it may be necessary to try several before finding the one that is effective on a particular patient.

Palmitoylethanolamide (PEA) is a naturally occurring lipid with anti-inflammatory properties. It down-modulates mast cell degranulation, which proved to be effective in the treatment of cutaneous hypersensitivity disorders in humans and animals. A preliminary study conducted on 17 allergic cats showed that at the dose of 10mg/kg q24h for 30 days it was able to improve pruritus, erythema, alopecia and lesions of the eosinophilic granuloma complex in two thirds of patients (Scarampella et al., 2001) (Figures 2 and 3).

A large controlled feline field study is currently in the final stage and results will soon be presented. This product, which has just been released to the international market (Redonyl Ultra, Dechra, UK), has the advantage of an excellent tolerability, can be used in mild to moderate cases and can also be used as a steroid sparing agent.

Omega-3 and omega-6 polyunsaturated fatty acids (PUFAs) may contribute to the control of pruritus and improve the epidermal protective lipid barrier, which was shown to be defective in allergic cats as in dogs.

Studies on efficacy of fatty acids are old, not controlled and conducted with unclear inclusion criteria, different formulations and protocols. With all these caveats, PUFAs are safe, can improve coat quality and can improve pruritus and lesions associated with allergy. A lag period of 4 to 12 weeks occurs before any benefits are seen. Like antihistamines and palmitoylethanolamide, PUFAs can be used as steroid sparing agents.

There are anecdotal reports of the successful use of maropitant at the dose of 2mg/kg in cases of refractory feline pruritus (Maina, personal communication), alone or in combination with ciclosporin and/or corticosteroids.

It is hypothesised that maropitant could inhibit pruritus by blocking the binding of substance P to NK1R at different levels. Interestingly, a human analogue of maropitant, aprepitant, has been reported to be effective in refractory pruritus in humans.

Although not licensed in cats, oclacitinib could represent an option for the treatment of refractory feline allergic patients. A recent open pilot trial in feline allergic dermatitis determined that a dose of 0.4 to 0.6mg/kg could improve lesions of allergy and pruritus in 5 out of 12 cases (Ortalda et al., 2015).

Preliminary, yet unpublished, results of a double-blind, randomised methylprednisolone-controlled trial on the use of oclacitinib at 1mg/kg q12h in 38 cats with allergic dermatitis did not find a significant difference in efficacy if compared with methylprednisolone given at the same dosage (Noli et al., 2017).

However, in this study, 25 and 50 percent of cats experienced an
increase above the normal range of creatinine and urea, respectively.
Pharmacokinetics, pharmacodynamics and toxicity of oclacitinib in cats
are not known, and this drug should be used with caution in the feline
species.

In some cats affected with head and neck pruritus, it may be
impossible to find an underlying allergic cause, and these cases are
thus considered idiopathic. Some cats affected with “feline idiopathic
ulcerative dermatosis” open large wounds on their neck by scratching (Figure 4).
For these cases, reports of single cases treated with oclacitinib 1 to
1.5mg/kg once daily, gabapentin 10mg/kg twice daily or topiramate 5
mg/kg twice daily have been published.

There are many treatment options for feline allergic dermatitis, from
allergen-specific immunotherapy to topical or systemic symptomatic
therapy. Although they seem to be more resistant to the side effects of
glucocorticoids, these should be avoided for long treatment courses and
alternatives, such as ciclosporin, PEA or PUFAs, should be used instead. 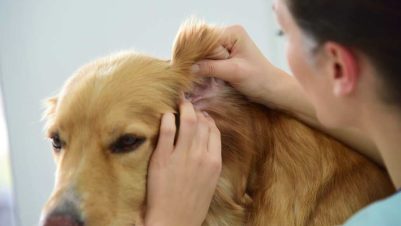 Management of otitis media in rabbits